STERN OF THE UNION ADDRESS – FEBRUARY 2019

The Stern of the Union Address will be on the first Tuesday of every month (holiday and vacation excepted).  Without further ado my fellow pinheads:

The Munsters at CES Recap:

As we at Stern Pinball settle in post-CES, we’re happy to report this was the most successful CES for us to date. We once again had a beautiful booth on the main show floor and participated in the CES Unveiled press event on Sunday, January 6th as well as the Pepcom press event on Monday, January 7th.

We kicked off the week highlighting our most recent roll out, the one-of-a- kind Beatles pinball machine. The Beatles pinball machine immersed attendees and players in 1960’s Beatlemania.  The game features nine timeless hit songs from that era. The press loved the machine and Stern was the darling of both press events we attended. A photographer for USA Today even captured Jack Danger playing at one of the events and named the Beatles machine as one of the coolest things/tech at CES!

Following those press events, Stern unveiled The Munsters on the first official day of CES. Having the games on free play wasn’t enough.  The team dressed up as the infamous cast members of The Munsters television series with Gary Stern as Grandpa, Zach Sharpe as Eddie Munster’s doll, Wolfy, and Jack Danger as Herman Munster. Later that night Gary Stern (still dressed as Grandpa) was spotted and shown on the jumbotron at the Golden Night’s game (Las Vegas’ NHL team)!

CES 2019 featured more than 4,500 exhibitors showcasing the latest tech innovations to some 180,000 attendees across more than 2.9 million net square feet of exhibit space in Las Vegas over the 4-day span.  Stern Pinball has become an anticipated exhibitor for CES attendees with our booth was consistently packed to the brim with our great games, garnering tremendous media exposure. 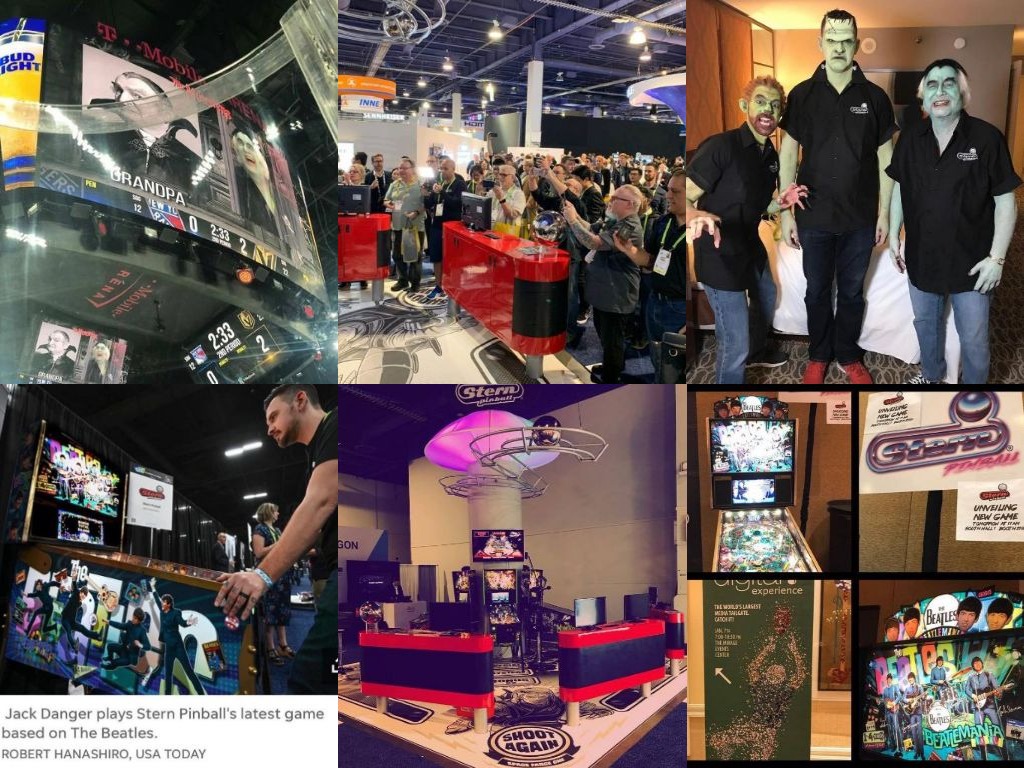 The official Munsters Pinball Launch Party list has been set and will be taking place all over the world!  Check out the final list and location nearest you for your chance to win an official Munsters Pinball Launch Party trophy and other prizes.  Launch parties are hosted in conjunction with the IFPA (International Flipper Pinball Association) and the Stern Army.  Official launch parties can only be held at Stern Army locations!  For more information on joining the Stern Army please e-mail SternArmy@sternpinball.com. 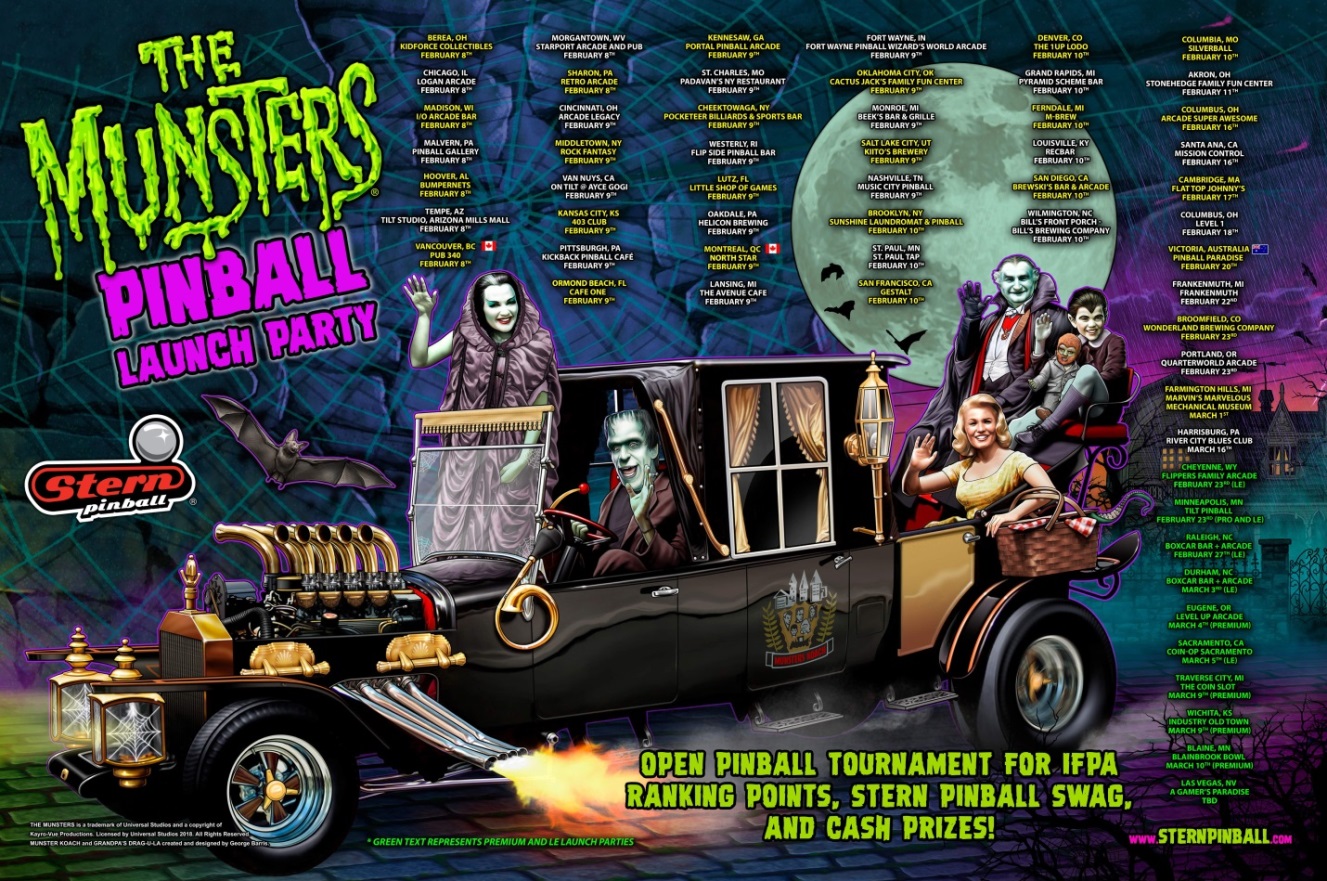 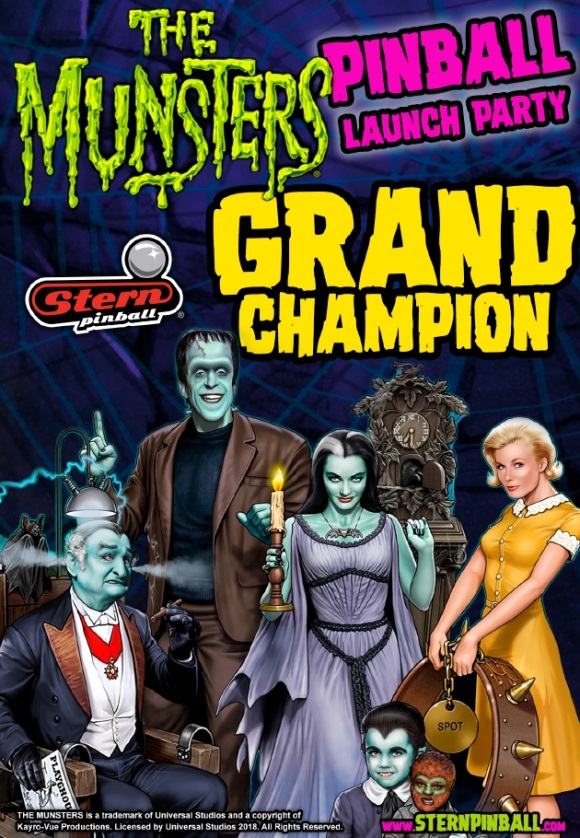 eBay presents the 2018/2019 Stern Pro Circuit Championship at the Bottom Lounge in Chicago, Illinois on March 9th! Featuring 40 of the world’s best pinball players, this event will be hosted by Brian “Q” Quinn of Impractical Jokers, feature a live performance by Ed Robertson of Barenaked Ladies and live streaming by Jack Danger of Dead Flip and PAPA.  The event is brought to you by PAPA, the IFPA and Stern Pinball. Be part of the premiere pinball event in the world and get your tickets before it’s too late! 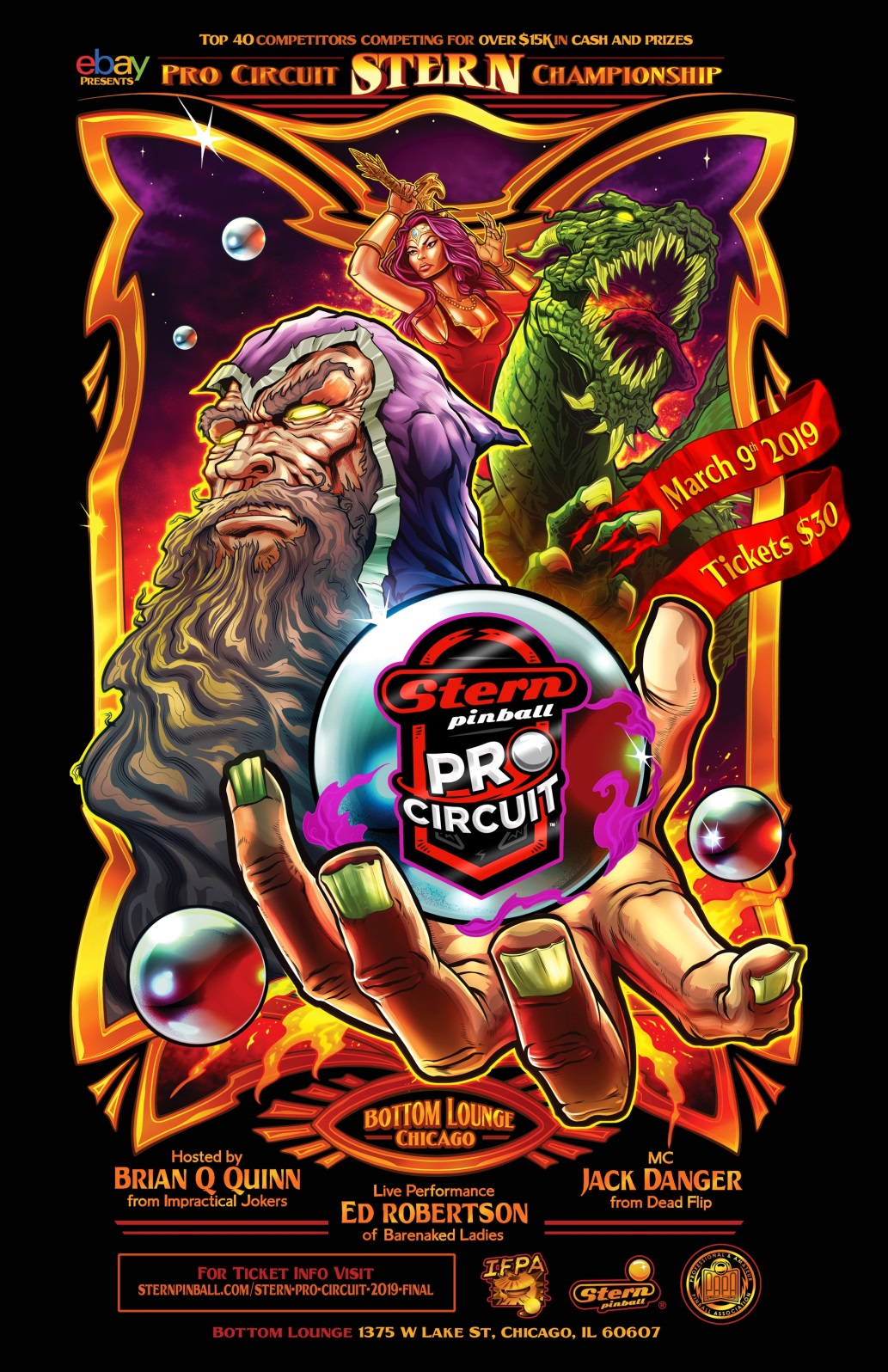 Congratulations to the players, and especially to the winner of the recent Stern Pro Circuit tournament at It Never Drains in Southern California (INDISC), Colin Urban (he’s only 16!).

For full details on the Stern Pro Circuit and to keep up with the current standings and schedule, please visit – https://sternpinball.com/stern-pro-circuit/ 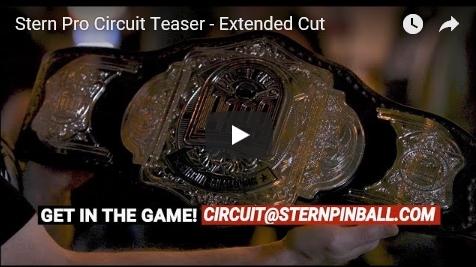 Stern Pinball had quite a presence at this year’s ESPN X Games Aspen thanks to our authorized Stern distributor, Game Exchange.  This event showcased pinball to an entirely new and captivated audience while enhancing our partnership with ESPN following our successful collaboration at the Bahamas Bowl game in December. 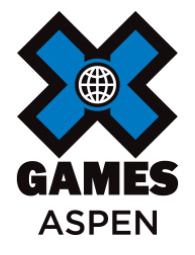 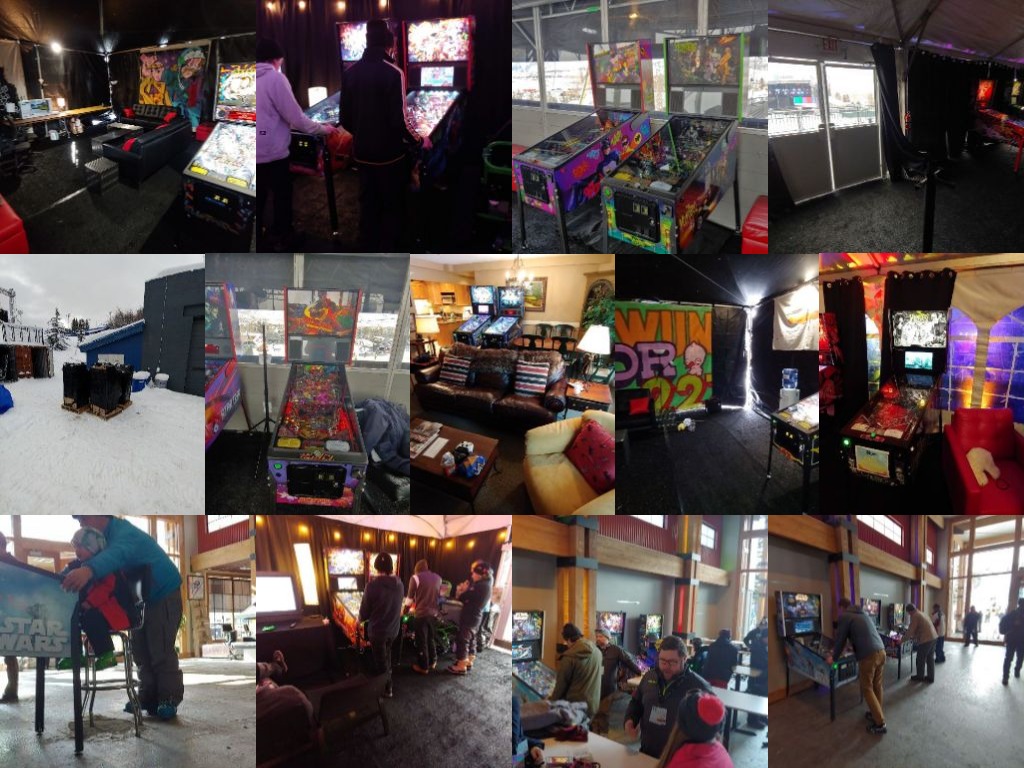 Deadpool LE Vinyl Albums have arrived!  For those of you who’ve completed the postcards inside of your LE machines, expect them in the mail soon (if not already).  For those who have not, please email wadewilson@sternpinball.com with your mailing address, serial #, LE# and the name of the distributor/dealer from whom you purchased your machine. 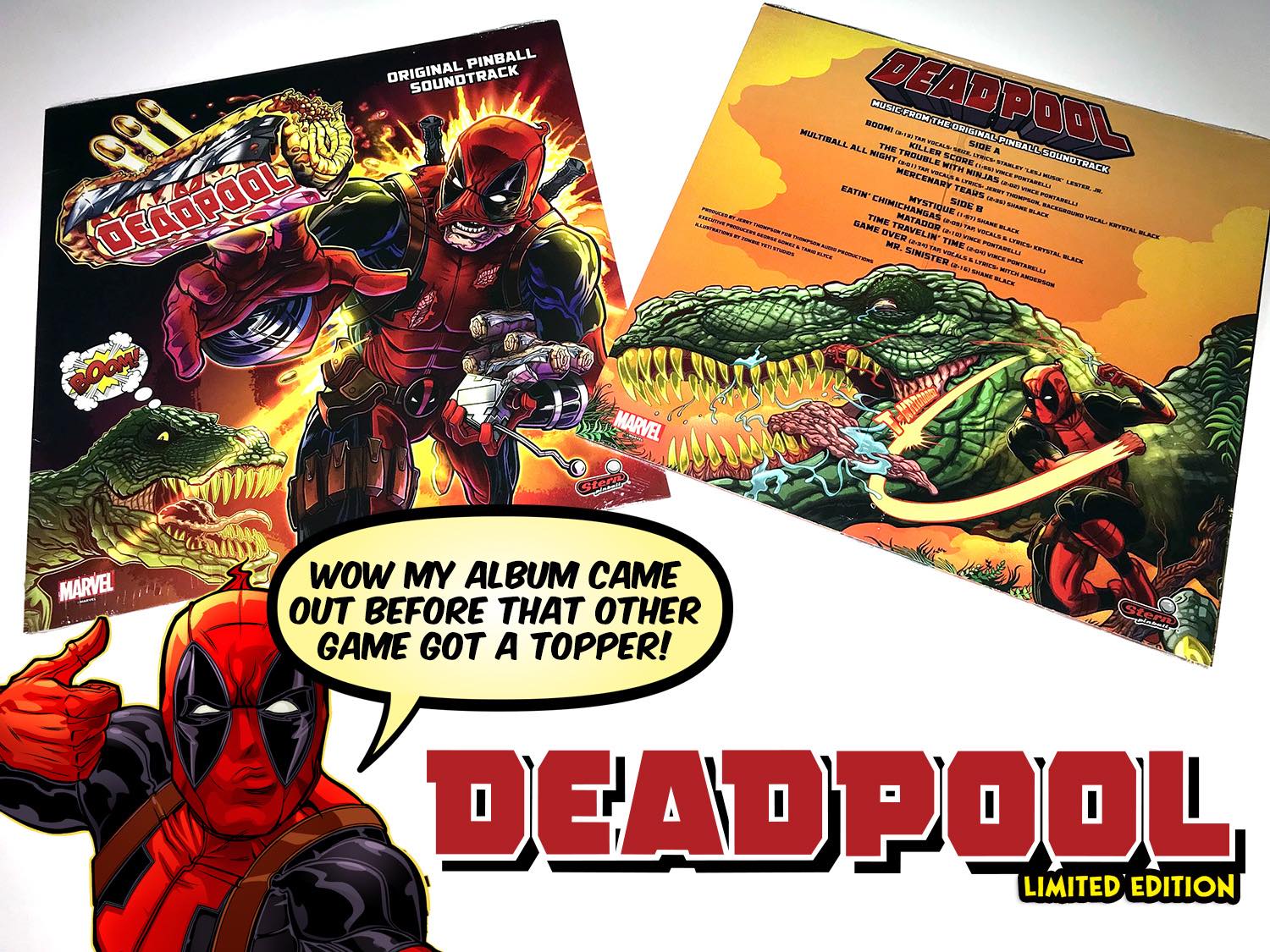 Check out our new Stern Shop for all accessories, collectibles, clothing and more.

The official Deadpool topper is now available in addition to other Deadpool game accessories. 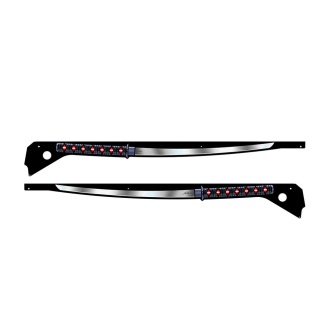 All Iron Maiden accessories are back in stock, check out the entire line here.

LED backlit translite frames for any of our LCD game displays are back in stock.

This is the last and final call for all Ghostbusters and Guardians of the Galaxy game accessories.

The physical model for the Star Wars topper has been approved.  We’ll make a formal announcement once it’s available for sale and add it to our Stern Shop.

To our biggest Cubs fan, we could not be more excited for Erik Gilly and his wife’s soon to be baby boy!  Best of luck to the Gillys from everyone here at Stern Pinball! 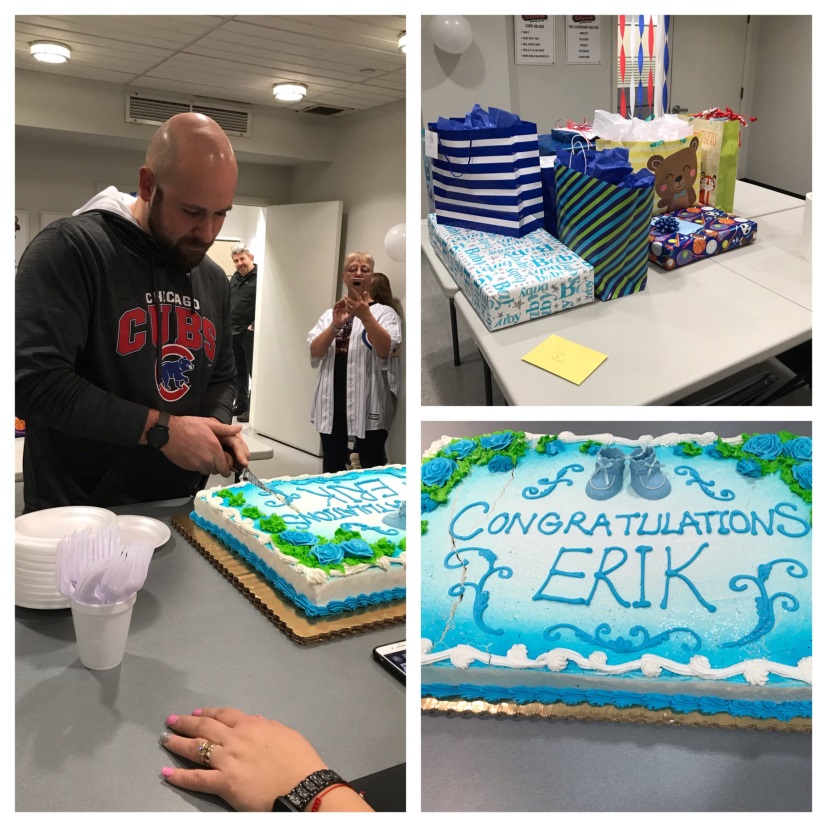 “My name is Chris Knox and I am the Plant Operations Manager here at Stern Pinball.  I’ve been a member of the Team since 2017.

I’ve been fortunate to have spent my entire career in manufacturing.  My first job out of college was working as an industrial engineer for Williams Bally Midway.  During my 25 year career, I have been formally trained in the Lean Toyota Productive System, JIT, Constraint Management, 5S and Continuous Improvement Methodology.  These experiences have driven me to the vision I have laid out for our Operations Team.

The vision is to streamline our manufacturing processes while focusing on world class quality.  This is done by developing a Team mentality in Operations.  I have built a talented group of engineers, supervisors, technicians and productions personnel that take pride in every game that leaves our facility.  We work hard every day to achieve one goal and love to celebrate our successes.

I can say I have one of the best jobs in the world.  Every day I make a fun product with an amazing team.

Come see our transformation and watch us grow!!!” 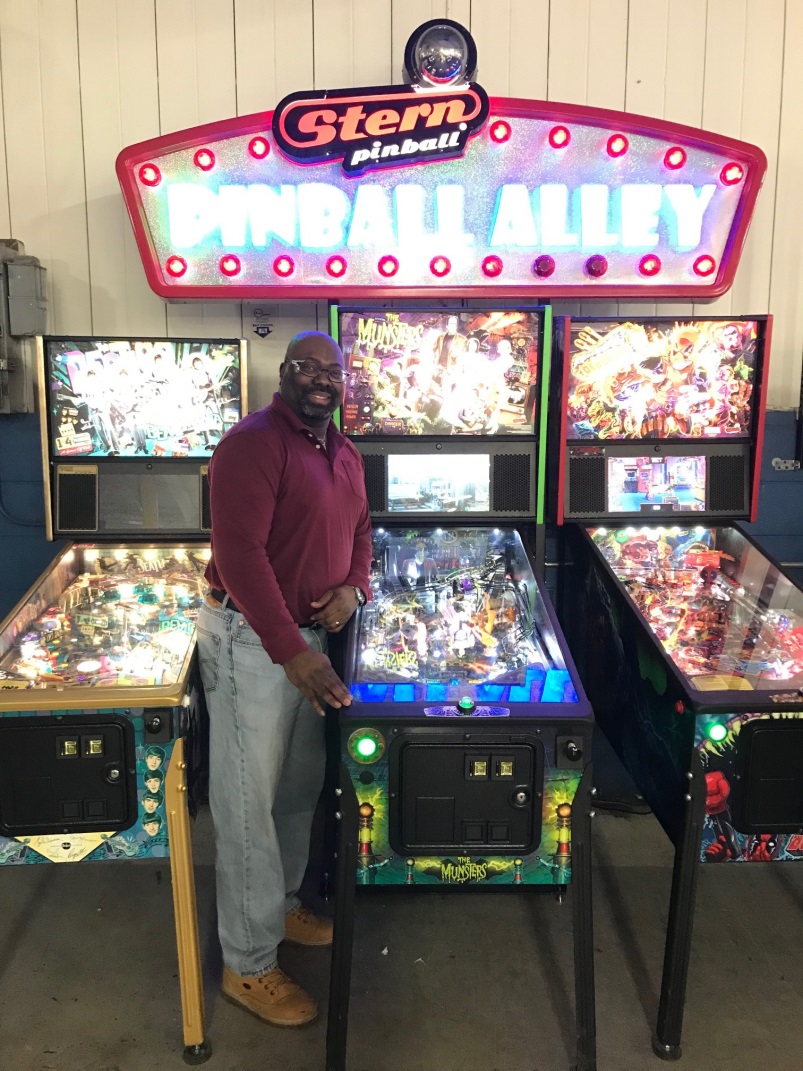